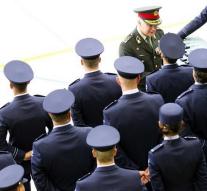 brussels - The plans to do at EU level research to develop weapons technology and jointly buy weapons and to be formulated soon. The EU member states want to lose time due to increased security challenges, appeared Thursday at the summit of the 28 heads of government in Brussels. Prime Minister Mark Rutte sees opportunities. 'Profit can be made by example to develop and to buy equipment together.'

The European Commission presented two weeks ago to get an action plan for the European defense and was commissioned in the first half of 2017 with proposals for a defense fund. There, Member States should be able to borrow in time of 5 billion annually. When countries make purchases together more often, could save billions annually.

In addition, the European Investment Bank should soon have the opportunity to fund research and development for weapons, said the leaders. That amount, according to the commission until 2020 should amount to an annual 90 million and then 500 million.

The leaders also agreed on 42 proposals to strengthen cooperation between the EU and NATO. Rutte gave as examples cooperation against cyber attacks and operations in the Mediterranean Sea, on the basis that the two organizations do not do things twice. According to EU foreign policy chief Federica Mogherini, the EU will now be 'much stronger and more credible' in the field of security and defense.