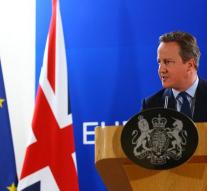 brussels - The government and the EU Heads of State are met Wednesday in Brussels to discuss the future. Tuesday night they have the British Prime Minister David Cameron waved. Which is not at breakfast.

,, It's not about Cameron today, it is about us, about our unity '', Lithuanian President Dalia Grybauskaite said on arrival.,, Of course we go, who would stop us? Migration and economic growth are still on the table. '' According to Prime Minister Mark Rutte not only the British electorate worried about Europe.,, Also in many other countries they exist. ''

,, More than ever we need a united Europe ', also said Luxembourg Prime Minister Xavier Bettel. Belgian Prime Minister Charles Michel emphasized the need to develop a strategy to shape the new relationship with the British.


EU President Donald Tusk Tuesday already announced that meet the 27 again in September for further discussion.,, We also talk about this, because the situation is extraordinary, '' said Grybauskaite.,, If it is necessary we do it earlier. ''

European leaders last week argued even before a new start for the European project. Eastern European countries would like to take this to the EU to radically change, and give more power to national parliaments, at the expense of Brussels.