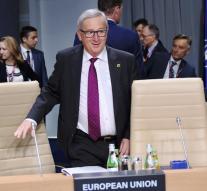 - President Jean-Claude Juncker of the European Commission and EU President Donald Tusk on Tuesday for political talks arrived in China. At the beginning of the two-day EU-China summit they talk with Chinese Premier Li Keqiang. are mainly economic issues on the agenda.

The EU wants to keep structures in position to avoid being flooded its market with cheap products from China. European firms warn that other jobs in Europe will be at stake.

The EU is the largest trading partner of China and China the second largest in the EU, after the United States. European companies have been complaining for years about limited access to the Chinese market, unfair competition, lack of transparency and legal uncertainty.