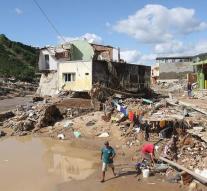 brussels - European volunteers who want to be useful in responding to potential disaster areas worldwide vacancies Tuesday has opened the European Union. After a thorough training they are sent out late this year to countries such as Tunisia, Ecuador, Jordan and Cambodia. They are not used in acute emergencies.

Mostly engineers, political and social scientists, economists, accountants and people with an educational background are invited to respond. The program works 4,000 Europeans.