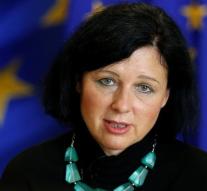 washington - The EU is investigating whether the agreements on personal data of Europeans stored in the US provide adequate protection.

Jourova also joins Facebook and Google, two of the more than 2,400 companies that apply the shield. The Privacy Shield Agreement was closed in July last year and is the successor to Safe Harbor, which, according to European courts, was not sufficiently protected by EU citizens.

According to the White House, the evaluation will 'show the strength of the American promise to protect personal data from citizens on both sides of the ocean.'

The European Parliament, European Privacy Guard and Consumer Organizations earlier this year were very critical of Privacy Shield, partly because US investigation services could use the data without the intervention of the judge. There are also concerns about the incorrect functioning of the US regulator who has just been called to guard against misuse of personal data.