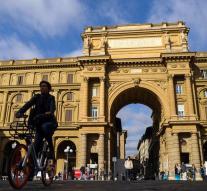 florence/london/brussels - At the allegedly historic speech held by the British Prime Minister Theresa May in Florence on Friday afternoon, there is no envoy of the European Union.

May is in the Italian city to indicate in an old convent complex how her country wants to go further in the difficult negotiations with the EU. They are about the British departure from the union. She is with Ministers Johnson (Foreign Affairs), Hammond (Finance) and Davis (Brexit).

May has chosen the world-famous Old Trade and Industrial City of Florence for its speech because it is 'the heart of Europe. 'Some British media suggest that May also chose the birthplace of Machiavelli and the capital of Tuscany because it is a very famous European city that does not associate with the EU.

British and Italian media reported that Rome sent only a state secretary to May's speech.