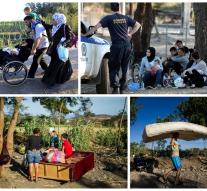 brussels - The European Union wants for Wednesday to send more than four hundred border guards to the Balkans and Southeast Europe to get the refugee crisis in the region under control. This is stated in the draft of the summit that government leaders conduct Sunday in Brussels.

The border guards should be used, inter alia in Slovenia, the EU has asked for help. They also need to ensure that the borders between Greece, Albania and Macedonia are better monitored. In addition, the number of controls along the Greek coast should increase significantly.