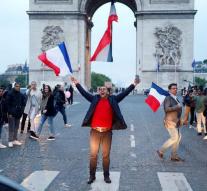 amsterdam - And again, the EU gets relieved breath. With the choice for the inexperienced Emmanuel Macron as president, France remains at EU rate and the anti-European Marine Le Pen is suffering from her wounds.

For what Mark Rutte called the 'wrong kind of populism', France also has a ceiling. Earlier, Geert Wilders's PVV remained in second place.

Macron's profit was unprecedentedly high. In French presidential elections, the difference is usually smaller than the 65 to 35 percent who now separated the candidates.