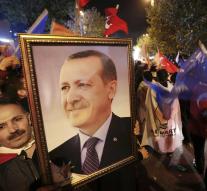 brussels - The European Union trusts that the Turkish Government is doing everything possible to strengthen the rule of law and fundamental freedoms and again " constructive " talks to the (Kurdish) opposition. Writes EU Minister Donald Tusk Tuesday in a congratulatory letter to the Turkish Prime Minister Ahmet Davutoglu.

The Turkish government led by the AK Party of President Erdogan took Sunday an absolute majority in parliament. Tusk says that the Turks despite the difficult security situation and the increased restrictions on the media could really choose from " credible political alternatives ".

Given the " new-found confidence " the Tusk government expects again to be built on trust in society. The Turkish police arrested dozens of people on Tuesday that would be associated with Fethullah Gülen, Erdogan's political enemy. Were again denounced journalists who are affiliated with the opposition.

Tusk makes no mention of the criticisms of the official European observer missions. " Unfortunately, the campaign for the elections was characterized by dishonesty and, seriously, fear ", said the head of the parliamentary mission of the Council of Europe Monday.

The EU needs Turkey to stem the flow of refugees from that country. Tusk said looked forward to discussions on improving cooperation in this area, including Turkey's application for EU again comes up. He hopes to have a " strong and visible " signal from Turkey.