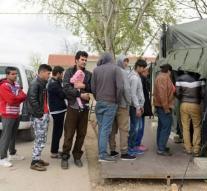 luxembourg - Hungary and Slovakia are required to take asylum seekers from Italy and Greece. Their objections to the EU agreement in 2015 to spread thousands of migrants across the Member States for two years are unfounded, judges the European Court of Justice in Luxembourg.

The court follows the advice of his Advocate General at the end of July. Hungary and Slovakia had come to the highest EU judge after voting on a special quota council for refugees in September 2015 at a special ministerial council in Brussels, like the Czech Republic and Romania. However, the majority was for the plan.

The request of the two countries to declare the decision void is rejected. The court also finds that the distribution of asylum seekers across the EU is a proportionate means of helping the two Mediterranean countries to process the migrant crisis.