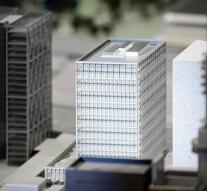 luxembourg - The planned establishment of the European Medicines Agency (EMA) in Amsterdam on 30 March 2019 will not be suspended. This has been determined by the European Court of Justice in the summary proceedings filed by the city of Milan.

Milan had requested the suspension pending a final decision by the Court on the EU agency's allocation procedure. Italy is seeking annulment of the decision to move the EEA after a ticket to Amsterdam. The Court says that rejecting the suspension 'does not prejudge a ruling on the substance of the case. '

The agency has to leave London because Britain is leaving the EU. In November, EU member states voted on a new place for which nineteen cities had signed up. Amsterdam dragged in the coveted agency after a draw with Milan because they finished after three rounds of voting.

The Italians also oppose that the new office on the Zuidas will be ready in time so that the continuity of the work, a compelling condition for the candidacy, is not guaranteed.