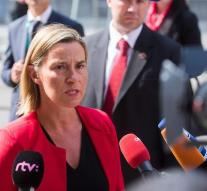 - can be put real steps in the short term in the field of European defense cooperation. The foreign ministers of all 28 EU countries responded positively to proposals Friday in Bratislava, said EU foreign policy chief Federica Mogherini.

A European army will not come quickly, but there are plenty of opportunities to strengthen political cooperation, the Italian argued. As an example she gave robust European combat troops and substantial (non-military) support in local elections in Ukraine.

Mogherini presented its strategy for safer and stronger Europe in late June and welcomed the political support of the Member States. About a week following a so-called roadmap, which should be worked out later this year concrete proposals. Minister Bert Koenders had called for quick agreement on the timetable.


How ambitious is the effect is a matter for the Government. Mogeherini hopes that here two weeks bend over, even in the Slovak capital.