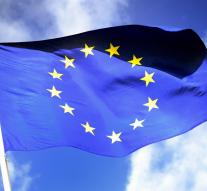 brussels - A week after the attacks in Paris come the European Ministers of Justice and Home Affairs meeting in Brussels Friday to come up with a unanimous answer and show support for France. Tighter controls at the external borders of EU citizens are high on the agenda. That prevent the Jihadists returning unnoticed entering Europe again.

Checks must immediately " systematic and coordinated " are, it says in the draft text. That would mean not only whether a passport is still valid and correct the picture. As of March would be the computer systems of the 26 European countries in the Schengen zone have to be linked to that of among others the police organization Interpol, so that recurring Foreign rebel fighters in the Syrian Civil War always fall by the wayside.

They also want the EU countries that the European system for the registration and exchange of data on air passenger name record (PNR) is coming soon. A decision on this is now before the European Parliament, which has lots of privacy concerns. Several parliamentarians to slide Friday. They probably are told that they must close ranks.

Furthermore, the ministers discussed the proposal of the European Commission to address the trade and possession of firearms. So it should be banned throughout Europe for individuals to possess semi-automatic weapons. Also, the regulation legal weapons must be improved.

Also ways to address lenders terrorism to be discussed. A tricky subject is beyond the exchange of information between intelligence services in Europe, which is considered by many to lack of land. Ministers may decide to give a boost here.

" This meeting should produce concrete results and actions ", according to the Luxembourg Minister Etienne Schneider, which the ministerial emergency meeting convened with France. On behalf of the Netherlands Minister Ard van der Steur (Security and Justice) present.