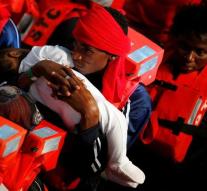 brussels - More ships and training from the Libyan coastguard should ensure that the number of drowned migrants in the Mediterranean is decreasing. The EU government leaders therefore decided to invest more money and energy here on Friday at their Brussels summit.

This year, 1700 people have already drowned. 'We must finally put an end to this tragedy,' said EU president Donald Tusk.

Until now, the EU has trained 110 Libyaans. This has to be speeded up, because the influx of the mainly economic migrants who travel from Libya to Italy remains high.

Some Member States do not yet come across the bridge to pay for the operation. 'The leaders will do their utmost to coordinate better and help Italy,' said Tusk.

Amnesty International had urged the EU to terminate its cooperation with Libya. Returned migrants await in almost all cases illegal detention, torture and rape, according to the human rights organization.

Strengthening cooperation with North African countries in search and rescue operations has a 'high priority', the leaders decided further. Efforts to help African countries to stop and recover migrants must also be increased. This year, 4400 migrants, with the help of the UN, have volunteered to return to Libya from Libya. There were about 2500 in 2016.

'The refugee crisis is not temporary and demands a long-term response,' said French president Emmanuel Macron.