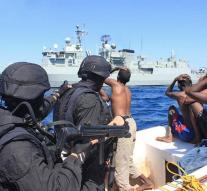 brussels - The EU mission against pirates off the Somali coast will continue until the end of at least 2018. The 28 Member States decided to extend Operation Atalanta in Brussels on Monday to two years.

Netherlands doing since the beginning (December 2008) join Atalanta. Between August and the end of this year is Dutch frigate Zr. Ms. Tromp as command ship.

As the threat of piracy off the coast of the Horn of Africa is getting smaller, the size of the mission is being phased out. The tasks also includes escorting ships, including food ships from the UN and the monitor of fishermen.

In recent years, more attention to the Somali mainland, because there the cause of the piracy. Netherlands makes a maximum of fifteen soldiers participate in a training program for Somali army.