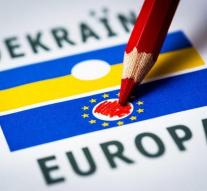 brussels - The Association Agreement between the European Union and Ukraine came into force fully at midnight. That was delayed because of the vote in April last year in the Dutch referendum.

Many parts of the treaty concluded in June 2014 have been provisionally in effect since September 2014, and the free trade area since January last year. From 1 September, cooperation in the fields of security, justice, migration, taxation and education will also be strengthened.

The Netherlands was the last EU country ratifying the agreement. Only after the EU government leaders in December demanded by Prime Minister Mark Rutte in a legally binding annex that the treaty Ukraine did not give a right to EU membership, the Netherlands could agree. It also states that EU countries are not obliged to provide additional security guarantees or financial contributions. In this way, according to the Cabinet, the objections of the no-voters were met.