Home / World / EU and London disagree with Court of Justice 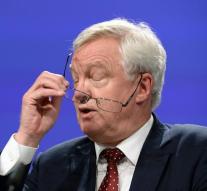 brussels - The European Union and the British Government continue to 'fundamentally disagree' how the rights of non-UK EU citizens living in the UK after the brexit are guaranteed. 'The EU sees no other way than the European Court of Justice remains the guardian of those rights,' said EU chief negotiator Michel Barnier.

Barnier said this Thursday after the second round of negotiations on the departure of the British from the European Union. The British Government has offered to give EU citizens in the United Kingdom a special status and to guarantee it under British law. If the country goes out of the EU, British legislation is no longer covered by the European Court of Justice, London finds.

David Davis, the EU Secretary of State, called the conversations of the past four days 'constructive and encouraging. 'He said that Brussels and London are about many things, but there are many' challenges 'about it.

According to Barnier, the next round, starting August 28, will provide 'clarification' about many questions the EU still has about the British position, for example, about the final note of the divorce. 'Clarity about it is vital to make progress. This file does not separate from the other topics. 'The concrete costs for the British, which include long-term pension and budget commitments, are not known but are estimated at 50 to 100 billion euros. Davis said the British government acknowledged its international responsibilities. '

Also, much work needs to be done to resolve the Irish-British border, the only country border of the UK with the EU. This border has been open since the Northern Ireland peace agreement in 1998, and that is what the EU wants to do.