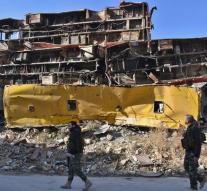 brussels - The European Union tightened its sanctions against Syria because of the ongoing violence in Aleppo. Abroad Chef Federica Mogherini stated Friday in a statement new sanctions in prospect against 'Syrian individuals and entities supporting the regime.'

What those penalties specific content is still unknown. However Mogherini made it clear that they are implemented in the short term.

The European package of sanctions against Syria is already extensive: EU bans include arms trade, financial transactions and trade in all kinds of goods and services with Syria.