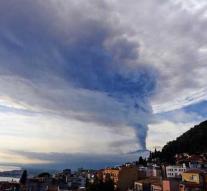 palermo - The most active volcano in Europe, Mount Etna, glides very slowly towards the sea. According to scientists, the mountain on the Italian island of Sicily moves 14 millimeters per year to the Mediterranean.

The volcanologist John Murray has been studying the volcano for thirty years, during the last eleven years the position of Etna was accurately measured. The volcano glides over a slight slope, he told the BBC.

The shift (1.40 meters in a century) is very small, but can have major consequences in the long run. The side of the volcano, which is at the bottom of the slope, can fail, causing large landslides. According to the volcanologist, however, it can take thousands of years before Etna reaches that critical stage.