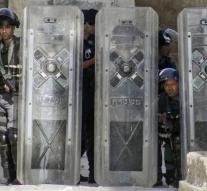 - Hundreds of Ethiopian Israelis in Tel Aviv on Sunday took to the streets to demonstrate against police brutality. The protesters accused the police of racism and excessive force.

The Israeli newspaper Haaretz reported that the Ethiopian Iraëliërs carried banners with slogans calling violent contacts and send to prison. They tried to throw a roadblock and they called the name of the young Ethiopian Israeli Yosef Salamsa. Who committed suicide a few months ago. He would shortly before have been mistreated by the police.