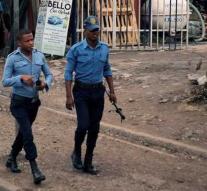 nairobi - The Ethiopian authorities say they have released over 1,500 prisoners in the Somali region in the east of the country. 'The released prisoners were suspected of anti-peacekeeping activities, among other things,' says the regional government on Facebook.

The government has released more than 6,000 people since January. There were several journalists and opposition leaders. According to the prime minister of the country, the releases are intended to return the peace after large-scale anti-government protests broke out in 2015. Hundreds of people died during those two-year protests.

The government imposed a state of emergency on Friday for a period of six months.