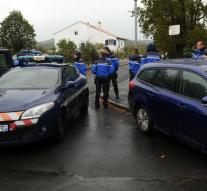 - The fugitive leader of the Basque separatist group ETA is Saturday in southwest France arrested in a joint operation by the French secret service and the Spanish police.

Reported that the French Ministry of the Interior. It's about the 64-year-old Mikel Irastorza, currently being held in a house in Ascain, a village in the French Pyrenees.

According to the statement, the police action is not over yet and more arrests are not ruled out.

ETA is blamed for the deaths of hundreds of people during the campaign of terror to enforce an independent Basque country in northern Spain. In 2011, the movement declared that they had ended the violence.