Home / Tech / Essential is to order 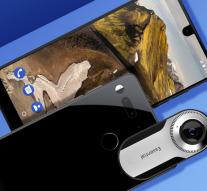 san francisco - The first Essential smartphone can be ordered. This means that the PH-1 is likely to be delivered sooner than planned. An exact date is not yet known.

The Essential was developed by Andy Rubin, founder of Android and former vice president of Google. His device is a high end smartphone that has to compete with devices Apple's iPhone 7, the Google Pixel and the Samsung Galaxy S8.

The edge-to-edge screen has only a small incline for the camera. According to Essential, the device is made of titanium, which makes it more robust than other devices. Competitors like Apple's iPhone and Samsung's Galaxy are often chosen for the softer aluminum. An Essential costs $ 699, converted to 626 euros. Initially, only a black version will be available. Later, a white variant will follow, and in the future probably also gray and green essentials.