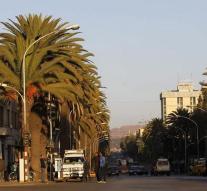 geneva - Eritrea is concerned that the Ethiopian army soon begins a major attack on its territory. Yemane Ghebreab, the main adviser to President Afewerki of Eritrea, which fears Tuesday spoke out in Geneva at the Human Rights Organization UNHCR United Nations.

Ghebreab had come to respond to allegations that his country is committing crimes against humanity. In his reply he said that the southern neighbor Ethiopia gears up for a major military offensive against his country. Nine days ago, there was an armed border incident, in which both countries blamed each other.

Eritrea was part of Ethiopia but seceded in 1991 after a fierce battle. Later the population voted for independence permanent. In 1998, the conflict with Ethiopia erupted. In late 2000 came to that fight ended after UN intervention. In the border area was several years the United Nations peacekeeping force UNMEE present. The wait is currently on a final demarcation of the border by an international commission.