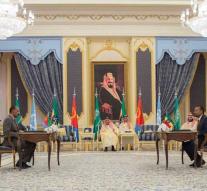 djedda - Ethiopia and Eritrea signed a friendship treaty on Sunday two months after the conclusion of the peace. That happened in the Saudi city of Jeddah, in the presence of UN chief Antonio Guterres and crown prince Mohammed of Saudi Arabia.

The treaty was signed by the Ethiopian Prime Minister Abiy Ahmed and the Eritrean President Isaias Afewerki. Ethiopia and Eritrea had reopened border crossings last Tuesday that had been closed for about twenty years. In July, telephone lines and flight connections between the two countries were restored.

Eritrea also wants to talk with neighbor Djibouti in the coming days. These two countries also have poor relations with each other. Guterres therefore said that a 'wind of hope blows through the Horn of Africa. '

Eritrea was formerly part of Ethiopia, but separated in 1991 after a fierce battle. Two years later the population voted for lasting independence. In 1998 the struggle with Ethiopia flared up. That war lasted until the year 2000. Even after the conflict, the relationship between neighboring countries remained very tense.