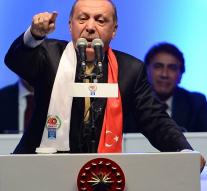 The left-wing pro- Kurdish Democratic People's Party (HDP) brings out all appearances, as with the previous parliamentary elections in June, the high electoral threshold (10 percent of the vote). The HDP could count on more than 11 percent, reported TV station TRT.