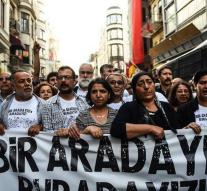 - Three years after the violent protests against the project in the Gezipark in Istanbul, Turkish President Recep Tayyip Erdogan will still continue the construction plans. He announced it on Saturday.

In late May last year arose initially modest protests against the rebuilding of a barracks complex from the Ottoman period in the Gezipark, next to Taksim Square. The protests culminated in massive demonstrations in Istanbul and other cities against the government's policy of Prime Minister Erdogan.