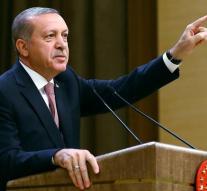 - Turkish President Recep Tayyip Erdogan has accused the West of supporting the coup plotters and terrorists. The attempted coup of July 15 was not only planned in Turkey but also abroad, Erdogan said Tuesday to an audience of businessmen in Ankara.

The Turkish leader holds the US resident cleric Fethullah Gulen responsible for the failed coup. The Gülen movement is seen in Turkey as a terrorist organization. Since the coup attempt are closed in Turkey many institutions and thousands of people gripped, dismissed or suspended which could have links with the movement.

Turkey wants to reduce the extradition of Gulen, but the US to a fair trial and a formal request with proof, then what Erdogan is again furious.