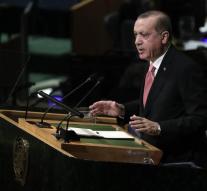 new york - Turkish President Recep Tayyip Erdogan believes that the international community must provide a larger financial contribution to the reception of Syrian refugees in his country. Especially the EU is failing, he said at the United Nations General Assembly.

In Turkey there are more than 3 million Syrian refugees. According to Erdogan, the cost of childcare is mainly borne by Turkish shoulders. Ankara has so far spent about 25 billion euros on refugee aid, the Turkish leader said.

The EU proposed Ankara financial support as part of the refugee party. That money was intended to help fledged Syrians in Turkey. According to Erdogan, Brussels held the hand. 'The EU has only sent 820 million euros of the 3 billion promised,' he said.