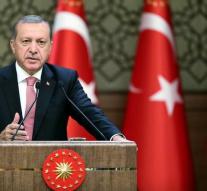 ankara - All businesses, schools and charities that have links with the Turkish cleric Fethullah Gulen his 'terror nests. That said, the Turkish President Recep Tayyip Erdogan on Thursday.

Erdogan announced that it would cut all income from such bodies. According to the president is particularly Gülen still very powerful in the business world. Therefore there will be no mercy shown.

The Turkish government maintains Gülen and his followers responsible for the failed coup of July 15th. According to Erdogan needs the entire state apparatus be reorganized in the aftermath of the coup attempt. The same applies to the armed forces.