Home / World / Erdogan: US also supports IS in Syria 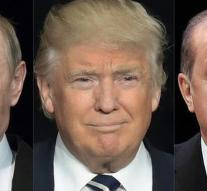 ankara - Turkish President Tayyip Erdogan said Tuesday that he has evidence that the grants in Syria coalition supporting the US-backed terrorist groups including IS and Kurdish militias of the YPG and the PYD.

' First, they accused us of helping Daesh (IS), '' he told a news conference. ' Now they lend themselves supporting terrorist groups like Daesh, YPG and PYD. It is very clear. We have approved instruments, photos and videos. '' Erdogan evidence, moreover, made not known publicly.

Russia reacted angrily Tuesday to the US decision to partially lift restrictions on arming the Syrian rebels. According to Moscow means a direct threat to the Russian troops in Syria. A spokesman for the Russian Foreign Ministry said the adoption of the new US law that arms supplies approves a ' hostile act '.