Home / World / Erdogan: Turkey will take matters into their own hands 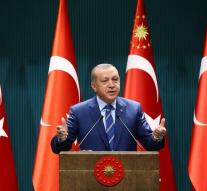 - Turkey is determined to,, to preserve the territorial integrity of Syria '' and will, if necessary, take matters into their own hands to protect it. That said the Turkish President Recep Tayyip Erdogan in Ankara Wednesday.

Shortly before Turkish tanks had crossed the Syrian border in an offensive against the Syrian border town and IS stronghold Jarablus. Erdogan said that Turkey only wants to help the people of Syria. Separately, the war in Syria, according to him, the main reason that Turkey is plagued by terrorism.

The Turkish president confirmed Wednesday began offensive against Islamic State and Syrian Kurdish fighters in northern Syria to halt the attacks a halt to the Turkish border.,, At 4 o'clock this morning began operations in northern Syria against terrorist groups who constantly threaten our country, as Daesh and the PYD, '' he said in a speech.


Daesh is an Arabic term for Islamic State, while PYD refers to the Syrian Kurdish fighters backed by the USA.