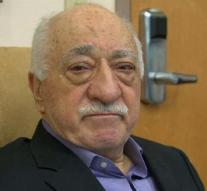 ankara - Turkey deals with the movement of cleric Fethullah Gulen,, just like any other separatist terrorist organization ''. That the Turkish President Recep Tayyip Erdogan said Thursday in an interview with Reuters. According to the Turkish president is the movement of the spirit, which resides in the US, behind the failed attempt to depose the government.

Erdogan believes that the Turkish army,, an important lesson '' learned of the coup attempt last Friday by a part of the military. According to the President, a new coup attempt even possible, but will not be easy:,, We are vigilant. '

Turkish intelligence service, according to Erdogan in the period before the coup made major mistakes.,, It is clear that there are significant gaps were in our information that we do not need to hide or deny, '' said Erdogan, who announced rapid restructuring in the military.


According to the President, there are no obstacles to extend the state of emergency, which has now been proclaimed for three months, if necessary.