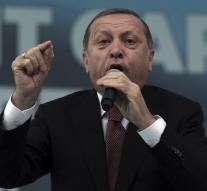 ankara - If the European Union 'goes even further,' Turkey will open the borders. That threat uttered the Turkish President Erdogan Friday. If he adds the action to the word, it means the end of the refugee deal between Turkey and the EU.

The relationship between Europe and Ankara has deteriorated rapidly in recent times. The European Parliament called on Thursday to freeze the EU Member States on accession talks with Turkey because of the 'disproportionate repressive measures' taken by the country since the foiled coup July.