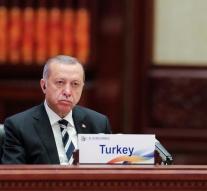 The Turkish authorities announced the state of emergency after the failed coup last year. That enabled Erdogan to rule by decree by far. According to critics, the measure is being abused to address opposition to government.