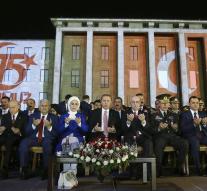 ankara - Turkish President Erdogan remains unharmed with hard action against the perpetrators of the failed coup last year. 'The poor cops and anyone who has fired us will no longer find peace,' he said in a nightly speech to the parliament in Ankara. If the people's decision decides to reintroduce the death penalty, he immediately signs his signature, he said.

Erdogan announced that the state of emergency shortly after the failed coup was being extended for the fourth time the next week. The president can then issue decrees that can not be challenged before the constitutional court.

Due to the state of emergency, 150,000 government officials have been fired or suspended and arrested 50,000. Journalists and representatives of human rights organizations have also been arrested.

Parliament chairman Ismail Kahraman called Gülen a 'mentally ill schizophrenic' and said, 'People, flag, Quran, faith, prayer, freedom, independence are our honor and our values. From whom we break, we break our hands, we cut off the tongue and destroy life. ' Kahraman belongs to the ruling AK party led by Erdogan.

The biggest opposition parties the CHP and the pro-Kurdish HDP remained at the nightly parliamentary session. Their leaders accused the government of destruction of the rule of law and the implementation of a 'second putsch'. Erdogan instructed CHP leader Kemal Kilicdaroglu to make a common case with the captains.