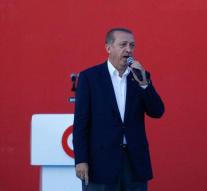 ankara - Turkish President Recep Tayyip Erdogan expected,, a new page '' to open in the relationship with Russia.,, Our countries have a lot to do together, '' Erdogan said in an interview published Sunday by the Russian news agency ITAR-TASS.

Erdogan is this week in St. Petersburg to the table with his Russian counterpart Vladimir Putin. The talks should improve the troubled relationship between the countries.

The Turkish president said attributable to ITAR-TASS on,, a historic visit, a new beginning. ' He sent earlier to a rapprochement with Moscow to apologize for the downing of a Russian fighter jet by the Turkish armed forces.


The men talk Tuesday on trade, energy and the resumption of Russian charter flights to Turkey. The conflict is on the agenda in Syria.,, Only with Russia as a partner we can solve the crisis in Syria, '' said Erdogan.