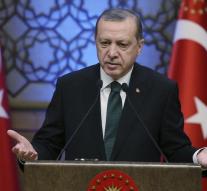 ankara - NATO allies leave Turkey in its fight against Islamic State in northern Syria in the lurch, the Turkish President Erdogan said. In the battle for the town of al-Bab are NATO members nor other allies in the region even 'the slightest support' given, he said, according to the state news agency Anadolu.

Erdogan blamed 'especially America' ​​not to support Turkey, but organizations that murder innocent people in the region. ' 'The Turkish president warned that terrorist groups will ever turn against the countries who help them now.

US being Wednesday allegations of Erdogan that she IS supporting or supplying weapons to the Turkish-contested Kurdish militia in Syria, fiercely rejected.