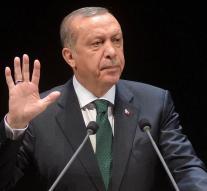 ankara - If there is an exodus gets under way in the Syrian city of Aleppo, there may be sometimes a million Syrians flee to Turkey. That said, the Turkish President Erdogan Wednesday. Aleppo is besieged by Russian and Syrian troops.

Erdogan said in his speech that he spoke Tuesday with Russian President Vladimir Putin. The two have reached an agreement on tackling the Jabhat fighters of Fatah al-Sham (the former Nusra front) in the city.