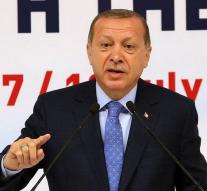 berlin - Turkish President Erdogan appeals to a court ruling in Hamburg about the speech of German TV comedian Jan Böhmermann.

The court ruled in February that the comedy can no longer submit certain parts, but for Erdogan that is not enough. The president does not want to hear more parts anymore. According to German media, Erdogan is discussing another six lines in the poem.

Read also: Böhmermann can not laugh at T-shirt

Böhmermann took on the head of the Turkish head of state on the neck with the poem Smaadkritiek, that he presented Neo Magazin Royale for the broadcast ZDF on March 31 last year. He introduced the strictly-loving Erdogan in connection with child pornography and sex with animals.