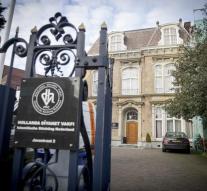 - The Gülen movement itself lies behind allegations of spying by the Turkish mosque dome in Europe. By Erdogan hated movement is responsible for a smear campaign against Turkey. Writes that the Turkish government in a press statement.

This newspaper revealed Wednesday that President Yusuf Acar of the Dutch branch of Diyanet mosque dome information had been passed on to Ankara. He sent a list of alleged Dutch sympathizers of the Gülen movement. In Germany and Belgium fuss about coming to the motherland from the European mosques.

' It is extremely worrisome that our religious officials are slandered with such dirty defamation resulting in a smear campaign '', said in a statement. ' That these stories are widespread after the attempted coup of July 15 is part of an anti-Turkish campaign by the terror of Fethullah Gulen. ''

Koenders called the Turkish ambassador this week to account. President Acar also works at the embassy as a religious adviser. CDA party leader Buma demands that Acar is put out of the country. In Acars report to the CDA Ankara is described as a bulwark infected by Gülen.

Ankara sees Fethullah Gulen, the evil genius behind the coup and has opened a witch hunt in his own country on suspected supporters. In Turkey since the coup, more than 125 000 people sacked or detained, including soldiers, judges, journalists and scientists.