Home / World / Erdogan: Europe is going to feel the consequences 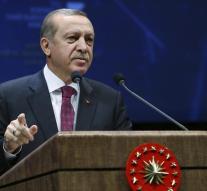 - The European Union must accept the consequences if she decides to stop the membership negotiations with Turkey. That said the spokesman of the Turkish President Erdogan Wednesday.

'If they fall back on such measures, they will have to live with the consequences,' Ibrahim Kalin said in a television interview.

The remarks follow comments from Brussels that Turkey must roll back human rights violations after the coup attempt, or else run the risk that the negotiations come to a halt.