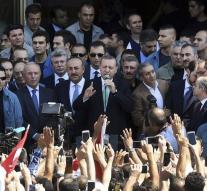 ankara - After the attempted coup of July 15 in Turkey, the president can continue without presidential guard. The Prime Minister Binali Yildirim said Saturday.

This guard is no longer needed, said the prime minister. Some soldiers attempted on the night of 15 on July 16 to take power. That failed and Minister Recep Tayyip Erdogan was the big winner from the chaotic and bloody expired night.

The government has since performs widely in political purges. There have been arrested according to Yildirim 13. 000 people. The government argues that the relatively liberal Islamic movement of Muslim scholar Fethullah Gulen was behind the coup.