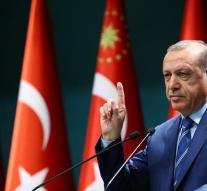 - The Turkish ruling party AKP has expelled four mayors that would have links with the Islamic cleric Fethullah Gulen. Reported CNN Turk. Minister Recep Tayyip Erdogan accused his rival Gulen, who lives in the United States of involvement in the coup attempt last month.

The four AKP mayors worked in four different provinces, according to CNN Turk, which relied on Yasin Aktay, the vice chairman of the party.

Since the coup, tens of thousands of people in the civil service, the army and security forces suspended, fired or arrested. When the failed coup were about 240 people dead.