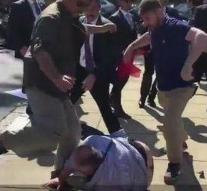 istanbul - Turkish President Recep Tayyip Erdogan is angry for the arrest of two of his security personnel in the United States. Erdogan told CNN Türk news channel 'to put everything in work, politically or diplomatically, to release the two'.

The two were arrested Thursday on suspicion of involvement in the fighting outside the residence of the Turkish ambassador last month in Washington. A charge has been filed against ten other Turkish security officers.

The fighting took place during a visit by Turkish President Recep Tayyip Erdogan to the US. Protector of the president went on the fist with protesters against the Turkish government. Eleven people were injured, including an agent.

The two arrested have Turkish nationality and live in the US. The chance is that the ten other accused will actually appear before the court. A few hours after the incident, she left Erdogan from the US.