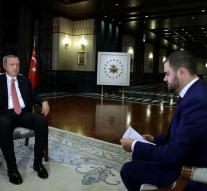 brussels - The Turkish president Erdogan will also adopt a bill of parliament on the reintroduction of the death penalty that brings the membership of Turkey in the European Union at risk.

He said during an interview with the Arabic channel Al-Jazeera. The EU had earlier this week made it clear that it immediately mean the end of the accession negotiations if Turkey enters the death penalty again. Erdogan seems to attract little to this threat. 'The world is not just the European Union. There is the death penalty in the USA, Russia, China and many other countries? Yes, 'he said. Turkey abolished the death penalty in 2004, set in the context of his candidacy for EU membership.