Home / World / Erdogan continues to quarrel with US 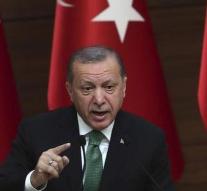 belgrade - Turkish president Erdogan has further increased the arguments with the US. During a visit to Belgrade, he blamed the divorced American ambassador to Ankara for the diplomatic crisis between the two countries. He said John Bass was no longer considered to be Washington's envoy.

Erdogan suggested that the diplomat had unilaterally acted upon the US decision to suspend the provision of certain visas in Turkey. This happened after a Turkish employee of the US Consulate in Istanbul was arrested on suspicion of espionage and the membership of the Muslim-led Gülen movement, which, according to Ankara, is behind the failed coup last year.

Ankara hit back with the same line of visas. 'We have not started with this problem, the cause is the US,' added Erdogan on Tuesday. Relations between the two countries are already fragile in the context of the conflict in Syria.