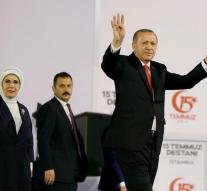 istanbul - On the first anniversary of the failed coup, Turkish President Recep Tayyip Erdogan has once again expressed his willingness to reintroduce the death penalty. During a memorial meeting at the Bosphorus Bridge, which became a symbol of opposition to the coup, Erdogan said Saturday night that he would sign the law for it if the parliament so wanted.

Many tens of thousands of fans cheer him in Istanbul. They demanded that the founders of the pit could be sentenced to death. Several faiths of the Turkish leader, who flew to Ankara late in the evening to hold a speech in parliament, had brought a strap in addition to the usual flags.

In the past, Erdogan was more aware of not introducing the death sentence. After his victory in the referendum on the constitutional amendment three months ago, the subject of the agenda disappeared. Until Saturday, during which Turkey was involved in the attempt to overthrow Erdogan last year. The opposition parties CHP and HDP are in serious criticism. They also stay demonstratively at the nightly meeting of parliamentarians in the capital.