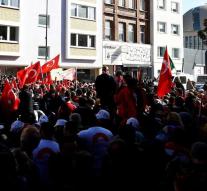 cologne - Turkish president Recep Tayyip Erdogan closed his three-day visit to Germany on Saturday with the official opening of the Central Mosque in Cologne. Elsewhere in the city opponents and supporters of Erdogan were on their feet, but that went without any notable incidents.

Erdogan called his visit to Germany 'succeeded. 'In his speech in the mosque he said that his journey deepened German-Turkish friendship. With Chancellor Angela Merkel and Federal President Frank-Walter Steinmeier, he had discussed 'genuinely important issues', such as economic investment and how to 'fight effectively against racism and Islamophobia,' Zeit Online said. Furthermore, Erdogan called for a better integration of Turks in Germany.