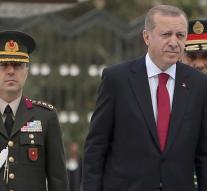 - The state of emergency means, according to the Turkish Constitution which fundamental rights may be restricted or temporarily no longer apply. Minister Recep Tayyip Erdogan can rule largely by decree.

Measures that can legally take the Erdogan government in this situation are:


- Prohibition of passenger and freight traffic at certain times or in certain areas.


- Control of traffic on land, at sea and in the air.

- Check on all radio and television broadcasting, distribution of text, images and sound and, if necessary, restriction or prohibition.